(Continues from Spelling correction with pyhacrf.) In this post I’ll look in more detail at how pyhacrf can be used to generate spelling corrections for incorrect tokens. We’ll use cross-validation to set the regularisation parameter, add character transition features, and compare the model’s spelling suggestions to a Levenshtein baseline.

In the previous post I mentioned that one of the advantages that an HACRF model has above the normal edit distance is that different character substitutions can have different weights. That will allow the model to give a higher weight (or probability) to substituting cat to kat than to hat. I didn’t get around to showing how it works though.

The dimension of the extracted features now jumps from 3 to 3972 (sparse) features. There are 63 characters in the character set we use here. If we add a feature for each character to character transition, that adds 63 x 63 = 3969 features to the 3 that is already there.

The model will learn a parameter for each of these transitions, for each state (match or non-match at the moment). For each position in the lattice, if, for example, the character a occurs in the first string and b in the second string, then the ('a', 'b') feature will trigger at that position and the energy of that lattice position will be increased by the exponent of the corresponding parameter.

Let’s set the regularisation parameter by doing a parameter sweep.

The model that is trained without the transition features have accuracies between 96% and 97% for both the training and testing sets: 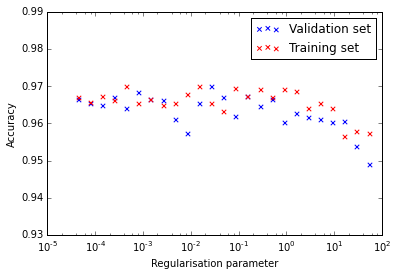 If we add the character transition features, we can see that the model overfits if the regularisation is too low. Initially I thought that 1 looks like a good value, but the transition images below was noisy and a value of 10 made them prettier and more interpretable. In any case the choice of regularisation doesn’t have a huge effect. 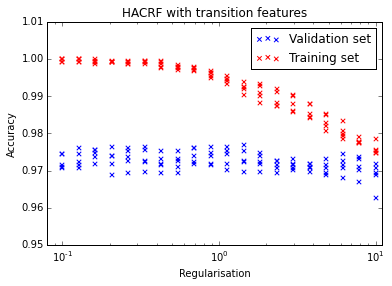 What are the learned weights?

The weights that the model learns for each character transition can be visualised as a character ‘transition matrix’. Let’s just show the first 27 characters, which is the alphabet and ‘0’: 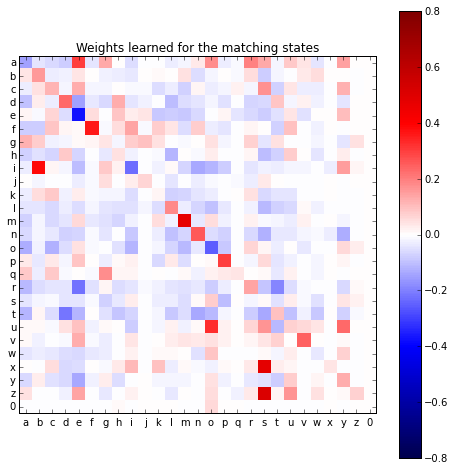 We can see that the m to m, x to s, z to s, and i to b transitions are associated with the matching state. It makes sense that z and s are interchangeable, but i and b doesn’t make sense to me yet. 0 to o also has a positive weight, which makes sense because there are examples in the training set such as ('0kkay', 'okay').

Also interesting are the entries on the diagonal - which represents character matches. I would have guessed that these weights will always be positive, but all the vowels except u are negative. All the other states’ transition weights have to be taken into account, of course, so it isn’t as simple as positive weights mean match. If the mismatch states’ weights are even larger negative values then the net effect will still be to favour the match label. 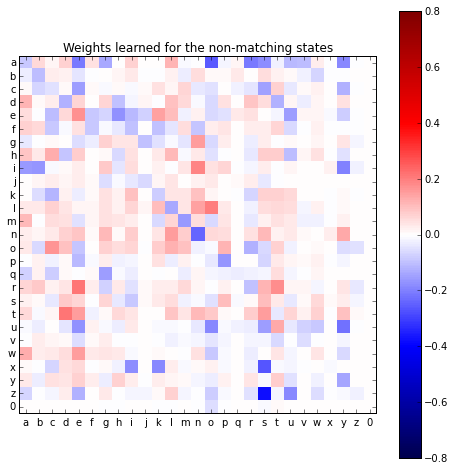 The 1, or non-match state’s weights contain much the same information. Where there was a positive weight previously there is now a negative weight and the other way around. One exception is a to a - I can’t think of a specific reason why this is the case.

To do this the 20 000 most common words according to a word frequency list is used as candidates. The distance (probability of match) from each of 1 000 incorrect tokens to each of these candidates is calculated and the 20 000 candidates are sorted according to these probabilities.

To speed up the system, the top 1 000 candidates of the Levenshtein baseline (which is much faster than the HACRF) is used as input to the HACRF. The slower model thus only has to score 1 000 candidates per token and not 20 000.

The HACRF generates better candidates than the baseline, but it seems that adding the transition features unfortunately makes it generate worse candidates.

The addition of the transition features doesn’t improve the performance. This might be because the model is overfitting, and regularisation isn’t really helping.

There are a few things to try:

On the one hand I like the idea of throwing all the feature at the model and letting it figure out what works. (CRFs are notoriously used as everything-and-the-kitchen-sink type models)

On the other hand, the traditional and better modeling approach is to rather start with the simplest model and then, by inspecting its output, to increase the complexity where appropriate. I’ll explore some of this in a future post.